Home/Company/How to buy a gun

How to buy a gun

You can buy in person or online. If you’re totally new to firearms, experts suggest you buy in-person because you can feel how different models fit in your hand and ask questions.

Some gun stores and shooting ranges allow you to rent various guns. That’s a great idea for new shooters so you can get a feel before you buy.

And if you’ve never shot before, don’t worry! Stores love new shooters because you’re a new customer that will keep buying new toys. Just say you’re new at this and looking for help.

Don’t be intimidated by going into a gun shop due to cultural differences. Even if you’re the most pride-flag-waving liberal with your Bernie/Warren 2020 shirt on, any store worth your business will treat you with the same respect as a cowboy in an NRA hat.

Thankfully, the vast majority of legit businesses conduct themselves this way. If they don’t, then say thank you, leave, and share your experience on review sites.

If you do buy online, buy something new from a legit source. There are websites where individuals can sell guns to each other (which still goes through a background check). There are bonafide people and good deals in those marketplaces, but as a new shooter you probably don’t know enough yet to spot the really bad deals. And once you find out it’s probably too late. Guns do go through a lot of wear and tear, after all.

Different states and cities have wildly different laws about the types of guns you can buy, who can buy them, what you can do with them, and so on. Some places like San Francisco, Chicago, and D.C. try to ban most or all guns altogether.

Be sure to google for your local laws. Wikipedia has a nice breakdown summary by US state.

In almost all cases there will be a criminal background check. You’ll fill out a form and the store will run you through a federal database that usually only takes a few minutes to verify.

Cannabis: Note that even if you live in a state with legal marijuana, it’s still a crime at the federal level. These forms will ask if you are a “user of illegal drugs including marijuana.” There are no drug tests or verification.

Every gun has a serial number. Some states require you to register your gun and serial number in a government database.

Some states require a waiting or “cooling off” period. Which means you pick your gun, pay for it, and do the background check but then you can’t take it home for a while. The political thinking is that if someone is angry and walks into a store to buy a gun, by making them wait 7-10 days to carry it home they will cool off and not commit whatever crime they were intending.

Since the whole point of a gun is to make a chunk (or chunks) of metal fly downrange and hit a target, we’ll start there, with the ammunition.

What many people call a bullet is actually called a round. Like a “round” of drinks. But you’ll still hear people use the word bullet as slang for the whole cartridge.

A bullet is the specific part of the round that flies down the barrel and through the air to your target. During the firing process, other parts of the round are left behind and ejected as waste.

Other parts of the round are the casing, which is typically a brass, steel, or plastic housing that holds everything together. “Casing” and “brass” are the two most common lingo names.

Every round has gunpowder inside. That powder is ignited by a primer. That primer is a distinct circle in the middle of the base/rear on most ammo types. The popular and small .22 LR ammo, however, uses “rimfire” where the spark happens from smacking on the outer lip of the casing, rather than a distinct primer in the middle. 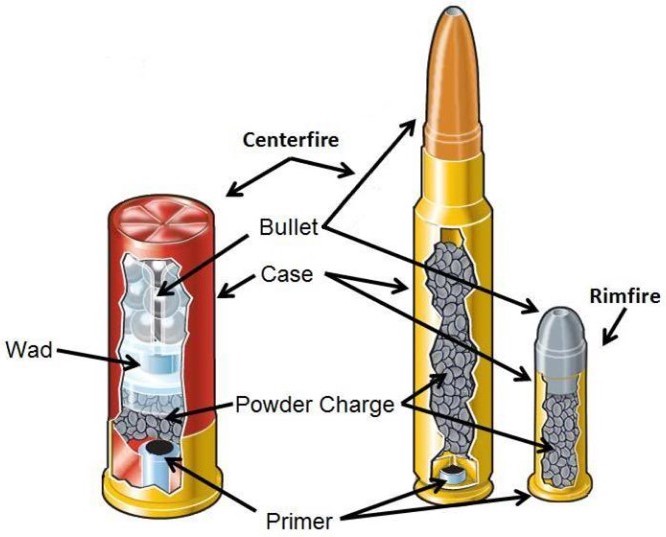 Shotgun ammunition is a little different because it fires lots of little projectiles instead of one bullet. That’s why shotguns are used in bird hunting — it’d be too hard to hit a flying bird with just one pellet, so you fire a bunch of pellets at once that spray out in a larger zone.

Shotgun ammunition is called a “shell,” or “shotshell”, and the bullets are called “shot.” But the principles are the same. You have a casing with a primer, gunpowder, and then the projectiles that are launched down the barrel.

Some types of guns — particularly revolvers and shotguns — are designed to hold a few rounds of ammo inside the main body. Other types hold the ammo in a separate, detachable housing that you load into the main body of the gun.

Those detachable containers are called magazines. Many people make the mistake of calling those clips, but a clip is a specific type of old-school housing you likely won’t ever use.

Most states in the US limit the size of magazines to 10, 15, or 30 rounds in a single container. Their thinking is that by limiting how many rounds are in a single magazine, it makes it harder for a criminal to shoot lots of bullets since they have to take the time to replace an empty magazine with a new one. But that also creates limitations in something like a home-defense situation, too.

Let’s say you know you want to get a pistol. One of the next big decisions is deciding what kind and size of ammunition you want to shoot.

Since the whole point is to sling metal downrange at a target, what metal you’re slinging can have an impact on everything else: how far it can go, how fast, what kind of sound it makes, what kinds of materials it’s meant to punch through, what the kickback feels like on your arm and shoulder, etc.

The way people identify one size versus another is by “caliber”, which is usually defined by the diameter of the casing. eg. a .308 round is wider than a .223.

There are other measurements that might matter as well, such as the length of the casing. So sometimes you’ll see a label like “9×19” which means the diameter is 9 and the length is 19. But usually the length is standardized and implied — eg. people know that a .223 is always 2.26 inches long, so the ammo box only needs to say “.223”.

Unfortunately, it won’t always be measured in millimeters or even follow a logical pattern. Because America is stubborn and refuses to join the rest of the world, sometimes things are measured in imperial and sometimes in metric. You’ll eventually learn the equivalent matches, like how the .223 inch imperial measurement is essentially the same as the 5.56 mm metric measurement — that’s the caliber the NATO military organization has standardized around so they can share supplies across different countries and units.

Sometimes the differences seem small, like the 9 millimeter round vs. the 10 millimeter round. But these are precision-built machines with exploding parts, so every fraction of a millimeter or extra grain of gunpowder matters.

There will often be a word or name after the numerical part of the caliber, like “.223 Remington.” For example, Remington is a gun company and designed the popular .223 Remington round used in AR-15s. But the specs are open source. You don’t have to use that round in a Remington gun and plenty of non-Remington companies now make the .223 round.

Shotgun ammo types are simpler in that there’s fewer to choose from (only about eight). But the naming convention is often more confusing than standard pistol or rifle bullets, and in many ways is a leftover from before the industrial revolution. 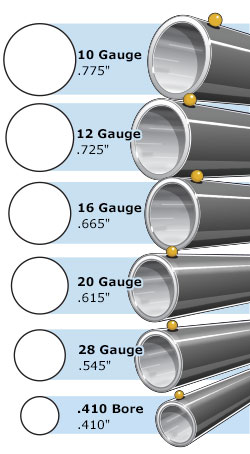 Imagine you start with a one-pound block of lead and want to make spherical pellets to use as shot in a shotgun shell. The bigger you make each ball, the fewer balls you’ll be able to make from a single one-pound block. That’s why the gauge number goes down as the shot size goes up.

Another way to think about it: it would take 20 lead balls with the same diameter as the barrel of a 20-gauge shotgun to weigh one pound.

There are other words involved in shotshell labeling, such as “Buckshot” or “Birdshot.” We go deeper into this in other guides, but the general idea is the label means what they’re meant to hunt. Taking down a buck (deer) takes more force than a bird, so buckshot is configured differently than birdshot. If you shoot a methed-up home intruder with birdshot, for example, they will bleed but might not be hurt enough to go down.

The type of ammo used is typically dependent on the type of gun. Shotgun ammo is always limited to just shotguns. Most pistol and rifle ammo is separate, although there’s a few options that are used in both types.

Since the ammo and goals/role are unique for each category, this is often one of the first decisions new gun owners have to make. Some people might choose a pistol because it’s cheap, simple, and easy to carry, for example, while others might choose a rifle because it’s more versatile and powerful.

It’s easy to get in the weeds on all of the little parts and names, but here’s the big stuff you should know as you learn more, make your first purchase, and navigate local laws: 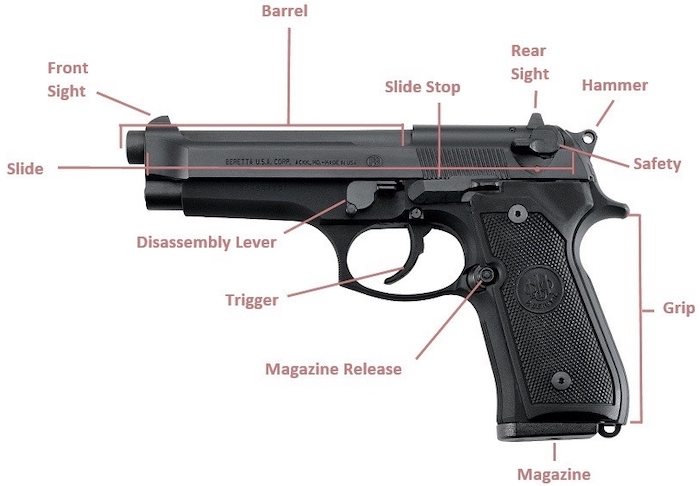 Local gun laws are part of why it’s handy to know these names. Instead of making laws that focus on bad people and what causes them to do bad things, many governments instead regulate the specific mechanical pieces and designs for everyone.

For example, in most places you are not allowed to own a rifle with a barrel less than 16” unless you go through special background checks. And part of what makes the legal difference between a rifle with a short barrel and a pistol with a long barrel is the buttstock — if a gun has a buttstock you hold to your shoulder (creating three points of contact vs. a pistol’s two), it’s generally classified as a rifle and subject to those laws.

Similarly, some places limit or prohibit the use of vertical foregrips or detachable magazines. So if you find yourself in a place like California, you’ll need to learn how local laws regulate “evil features.”